From 9th – 12th October I spent a couple of days in Sheffield. They were my personal writer’s retreat: I booked myself into a hotel and spent my days there to write. BUT of course I carried a couple of bottles to dispatch, too. I had a really good time, with walks along the river and canal, discovering little and big things on my excursions, with new ideas and trying marmite for the first time – and got a lot of writing done.

Unfortunately because I was writing anyway, I failed to write here on this blog while things were happening, which I now realise was a mistake: Packing everything I want to tell and show you into one big blogpost is just too much. So I decided to split it into three (or maybe it will turn out four) parts. You can find the first part here, in which I show you a bit behind the scenes bottle making.

I arrived in Sheffield later than expected on Tuesday, due to a derailed train at Sheffield train station. I had planned to first visit the river and then check in, but now I decided to first go to the hotel. Which turned out to be a good decision since Sheffield is much more hilly than expected, and with that I mean steap streets, steep, – mountaineous! Well, maybe it wasn’t quite as bad, but the constant sloping makes walking with a pull along suitcase full of books and paper (I was there to write after all) a bit of a hassle. Wikipedia agrees that my feeling that Sheffield is exceptionally steep is justified:

Sheffield is a geographically diverse city. The city nestles in the eastern foothills of the Pennines, and a natural amphitheatre created by several hills and the confluence of five rivers: Don, Sheaf, Rivelin, Loxley and Porter. As such, much of the city is built on hillsides with views into the city centre or out to the countryside. Blake Street, in the S6 postcode area, is the third steepest residential street in England, with a gradient of 16.6°. The city’s lowest point is just 29 metres (95 ft) above sea level near Blackburn Meadows, while some parts of the city are at over 500 metres (1,640 ft); the highest point being 548 metres (1,798 ft) at High Stones, near Margery Hill. However, 79% of the housing in the city is between 100 and 200 metres (330 and 660 ft) above sea level.

Well, I arrived on a lovely sunny and warm autumn day, and right after checking in to my hotel, I packed my backpack with some bottles, and started to walk to find the river Don. When I came closer to Lady’s Bridge (the oldest bridge in Sheffield), I discovered this:

Well, if that’s not inviting, then I don’t know what is. I went through the arch and immediately reached the Don:

When you look in the photo with the arch above, you’ll see that the path through the arch brought me onto a foot path along the river. From the entrance it looks like you could walk up or downstream, however the downstream path was blocked by a building next to Lady’s Bridge. The photo right above here shows the view looking left, upstream, onto the bridge from where I would shortly after dispatch my first bottle in Sheffield. Looking to the right revealed the sight of the Lady’s Bridge as you can see it in the photo further above.

I followed the path upstream and crossed the next bridge, the foot bridge you can see in the photo above, and then the walk continued on the other bank. Without much hesitation I decided to throw in my first botte, the 100th message in a bottle in this project:

The view from the bridge, a last look at the bottle, and then the farewell

My bottle drew the attention of some ducks which, although they seemed disappointed that the object that had fallen from the bridge didn’t seem edible, swam around and with it. Lazily the bottle bobbed in the water and moved very slowly. It was easy to cross the bridge, and then follow it on the Upper Don Walk until I reached came closer to the Lady’s Bridge and had to walk around a building which meant I briefly lost sight of the bottle. Up on the bridge I expected to see it again. I wanted to check whether it made it down the weir. But the glaring sun and its many reflections on the water made it hard to spot the little bottle. I have a series of photos which I shot in the believe they had the bottle on it. But upon close inspection on my computer, it looks just like waves and leaves and stones.

Upstream view of the Don from Lady’s Bridge in Sheffield

I mentioned before, that I was carrying not only my 4 bottles to Nottingham, but also Peter‘s. And as fate would have it, his bottles carry the same serial numbers as mine did. So I had another No. 100 in my backpack that wanted to be set free.
According to his blogpost he had read up on the river Don and knew to expect weirs. I was blissfully unaware of them until I saw them. I had dropped in mine without hesitation, but seeing its slow trundle along the lazy river, and also because it was rather big, I figured I’d rather drop it in from lady’s bridge, below the weir.

But, upon crossing the street and looking down the bridge, I had to realise that there was a little island just behind the bridge, blocking the free flow of the river. 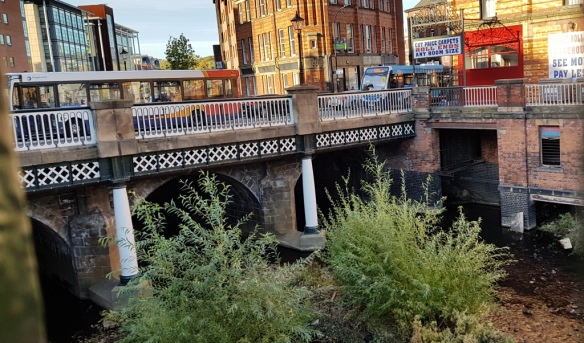 Lady’s Bridge from below the weir

I later learned, that these islands in the Don are due to the weirs. The rushing water washes up sediment, and with the water quality rising in the river, they are home to wildlife and are cherished and cared for.

Just downstream of Lady’s Bridge, the Upper Don Walk ends, and the Five Weir Walk starts. Ah, well, so there were more weirs to be expected.
From where I stood I could see the next bridge, and hoped to find a better place there to dispatch Peter’s centennial bottle. No such luck: Another island was waiting for it there. By that time, however, I was beginning to feel eager to return to me “real” work, and figured, I’d have more time tomorrow to explore more of the river, and after all, I had six more bottles to dispatch. So in it went. I took great care to find the best spot where the bottle would hopefully avoid the island. I watched it float downstream, happy that I seemed to have chosen well:

It went swiftly past the island, but then floated toward the right – and got stuck on a piece of driftwood. I watched it struggle for a while. The current and gusts of strong wind seemed to help it move on – almost. After a couple of minutes I gave up for the day, determined to come back the next day.