As you probably know by now I spent last week in Sheffield, mainly to work on my writing, but also with the aim to drop off a couple of bottles.

I wrote about my preparation in a first part here. There I showed you the four bottles I prepared, the four bottles that Peter sent me to dispatch for him, and I also mentioned that I packed two empty bottles for possible by-standers to fill.

In the second part I spoke about arriving in Sheffield and discovering that the Don where I put my bottles is full of little islands, had little water and current and in addition a lot of weirs. I dropped in both bottles nonetheless, and was able to observe Peter’s bottle getting stuck pretty much immediately, so probably now you want to know what happened next with it.

On the top of the blog you can see how I left Peter’s No. 100 behind on Tuesday the 9th. The place was just a 10 minute walk from my hotel, so the plan was of course to check the next day whether it was still there.

I was extremely lucky with the weather: The 10th was sunny and warm and felt more like a September than like an October day. When I came to the place at around noon, I was first pleased to see that the bottle was gone and apparently had moved on: 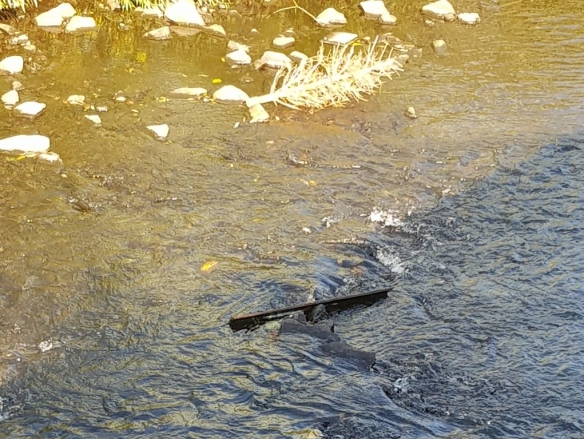 Nothing to see – Yay!

The whole board against which the bottle was resting moved a few meters along the river (I think that old christmas tree in there remained stationary, so you can compare with that), and in the process it obviously gave the bottle free.
I continued to walk along the river (I had more bottles to dispatch after all, but more about that later) and spotted the bottle again, only 20 or 30m further downstream.

The length Peter’s bottle travelled in one day

I believe you can click on the images to see them in enlarged (I hope so), in the second image I placed arrows where the bottle got stuck on the first and the second day. Of course I had to check again on my way back. The bottle had made a few more meters further downstream where it rested again with some other junk but still above the foot bridge located there.

The forecast for the next day (11th) predicted a day with showers moving through. I woke up to skies that looked somewhat threatening, and so I started early while it was still dry. The wind was blowing in gusts, but no rain. I first walked to the spot I last saw Peter’s bottle. It had moved again a couple of meters. I could see it moving very slowly, and then getting stuck once more between some floating grass and other plant material.
In the photo below just a little upstream of this cut through in the wall, that’s where I last spotted it. (The photo was taken a day earlier for the stone under the bridge, but that’s a story of its own. Anyway, that’s why the bottle can’t be seen in the photo.)

As I said, that was the last time I saw it. I went to look for it again the same day, just a couple of hours later, and I was unable to see it anywhere. Which is somewhat of a mystery to me: Given the slow manner with which it was moving I can’t understand how it could have disappeared out of sight in just a few hours. The river downstream from there looked like it had fewer hurdles, but still, it was moving at no more than half a meter per second so how far could it go? It was floating on the right hand bank which has a tall wall as its border… But who knows, maybe someone has found it already. – I hope we’ll hear from it again.

standing under the next bridge

the banks are all walled in, and not much debris in the river here, but of couse there are the occasional openings in the wall…

On to the next bridge; the bottle could be stuck in one of the arches where I might not have been able to spot it

This blog post is again getting very long, and I’ll try to cut me short. As mentioned before, the weather on the 10th was wonderful, and I walked slowly down the Don, putting in two bottles from the spider bridge,  visible in the photo above if you know what to look out for, and then I sat down and filled one of the empty bottles I brought with me. I had not arranged any meet-up, no-one I saw on my hike seemed interested, and so I just ripped a few pages from my notebook and filled them with a message on the spot. I didn’t give this bottle a number, as I don’t really regard it as part of this project. Well, maybe a little.
Below are photos taken on the 10th. If you click on them, you’ll be able to read some further comments on them if you like.

Twice bottle 101, the tall one is Peter’s of course

Peter’s and my bottle right after dispatch from spider bridge. Look carefully to see them both – Peter’s is a submarine bottle. 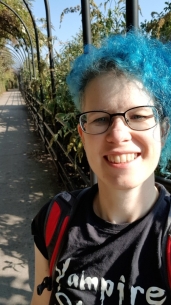 It was a really nice sunny day; – that’s me just behind Bailey Bridge 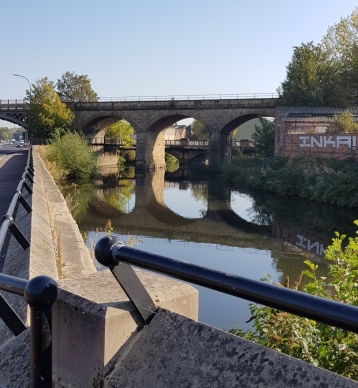 The view downstream where the five weir walk seemed to end. I decided I would drop a last bottle from the far bridge because it looked so beautiful. – I had to use up the empty bottle I brought with me for that.

My improvised bottle containing a letter and my business card

The next day, the 11th, I went out in the morning to first look for Peter’s bottle and while doing so, I spotted the entrance to Victoria Quays. So I decided to take a walk along the canal for a change. Because I had already spent the better of the day before hiking along the river I cut my visit relatively short and dropped my bottle just behind the entrance to the Quays. I wasn’t sure how Peter would feel about his bottle being put in a non-flowing body of water, and besides: it smelled awfully beneath the bridge where I placed it. For a bottle containing miniature kidney bowls seemed fitting but  beautiful bottle like Peter’s? – That felt just wrong. And so I held on to that one for a while longer.

some boats mooring at the quay. They are the typical boats that can be seen on canals all over England

This warf was puzzling to me. The boat or whatever I should call it looked so clearly dead to me, still there were sounds of work being done coming out of that hall. I figured, someone had put up a workshop at where there used to be a shipyard…

… but it turned out that they were still active AS a shipyard, or so it looks to me

The weather stayed surprisingly nice and dry that day, and for unknown reasons I struggled to get any good work done sitting in my hotel room. And so I decided to walk to the Don once more in the afternoon. I probably should have walked upstream for a change. But I was too curious to see whether and which of the dropped off bottles I might spot. Because I didn’t feel like dropping a bottle from a bridge where I already had been, I walked further than before, right into a nature reserve that made it almost feel like I had left the city. There I dropped then my last bottle, the No. 103 into the Don, and Peter’s 102.

On my walk to there I spotted two of my bottles: the unnumbered one above the weir at Norfolk bridge where I dropped it in, and one of my small bottles below the weir. I am not sure which of the two it was as the sun was reflecting so much that it was hard to see what was inside, but looking at the photos now, I am pretty sure it was the 102 that I put in from spider bridge the day before.

Can you see the bottle? It’s a little below the middle of the image, just about this green, natural wharf leading toward the weir

My bottle is hard to spot – it IS a small bottle. But it’s resting there. Take a close look at the big stones in the river 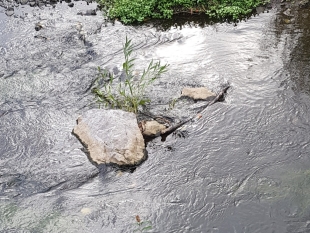 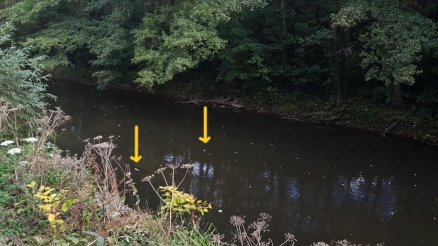 Here they are floating. I marked the spots that I think are the bottles

While walking along the river, the canal and through the city I made many more pictures with little and big things I spotted, street art and loving little details, imagining showing them to you. But my report is taking way too much time and space already, and I don’t want to bore anyone. Many thanks for your interest, dear reader, who has read until here. I’ll just let that guy below that I spotted on one of my excursion wave you good bye.

Like always, I wish all my bottles a good and far travel and happy finders.  – Next up will be the dispatch of Peter’s bottle No. 103 from Trent Bridge in West Bridgeford. Stay Tuned! 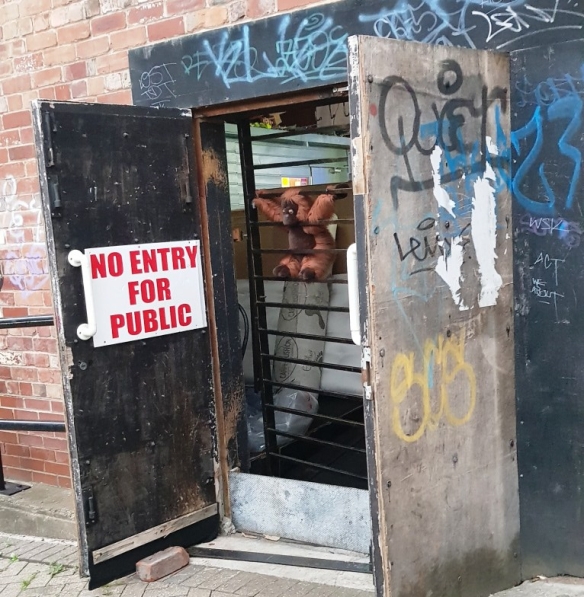