From 9th – 12th October I spent a couple of days in Sheffield. They were my personal writer’s retreat: I booked myself into a hotel and spent my days there to write. BUT of course I carried a couple of bottles to dispatch there. I had a really good time, with walks along the river and canal, discovering little and big things on my excursions, with new ideas and trying marmite for the first time – and got a lot of writing done.

Unfortunately because I was writing anyway, I failed to write here on this blog while things were happening, which I now realise was a mistake: Packing everything I want to tell and show you into one big blogpost is just too much. So I’ll split it into two or three parts and will publish them over the next couple of days. I hope you’ll enjoy them and stick with me!

When I announced on facebook, and shortly after here on this blog, that I would be dispatching bottles in Sheffield, I had made 99 bottles to date, and all had been set free, none was with me in my studio to take along with me. That was because I was slightly haunted by the idea that bottle No. 100 should be somehow special, and thus had postponed actually making one for a while.

The reason why I booked my stay in Sheffield was that I was (and am) awfully clogged with work at the moment. I have so much work to do, I find no time to work! (It sounds funny but it really isn’t. I will have to seriously think about how to solve the problem, but that’s a different story.) So maybe it’s no surprise that for a good while I didn’t do anything about the lack of bottles.

Then James Ismael Kuck, also known online as Peter S. or Peter Stein send me a message, asking whether he could send me some bottles for the Sheffield dispatch. “Sure”, was my answer, “it will be a pleasure!” And I was delighted that anyone had taken notice in my plans and was happy to participate. And it put the necessary pressure on to really get going and make some bottles. (If you don’t know his blog, click on the link, and you’ll find a wonderful mix of stories about messages and bottles, ocean currents, and people who collect or make messages in bottles; most of the posts are in German but a fair bit have English summaries or translations.) 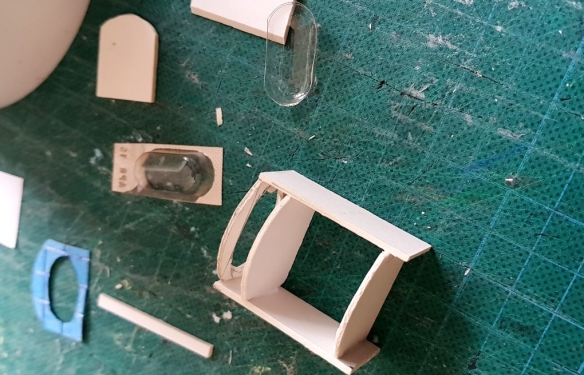 First steps in making a rounded bathroom sink and cabinet

There are two major things I try to continuously improve for my bottles, and have not found a universal (i.e. the best) solution for: a) where and how to place my actual message and b) how to best make use of the little space I have in the bottle.

To this end, I decided to try and make a curved piece of furniture this time. I first put some polymer clay into a bottle and baked it inside. Then I took it out, it kept its shape, so that I had a bit of “wall” to work with for my model. Of course the opening on top is smaller than the curve on the inside, but I thought I took care of that and set to work. Unfortunately it turned out that the cabinet was few millimeters too wide to fit in. – I had forgotten to take the thickness of the board properly into account. 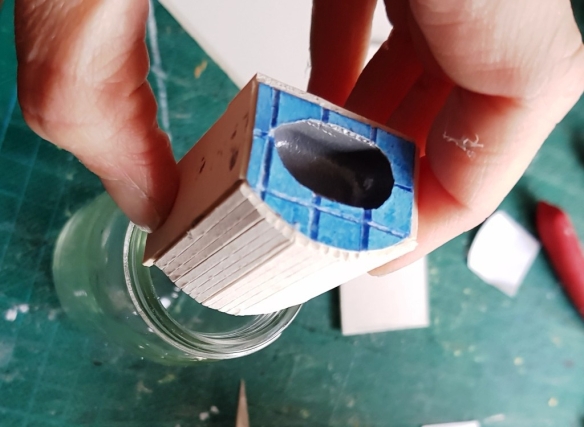 Doesn’t fit in by a fraction of a millimeter

So I started over and made a second cabinet, just a bit smaller. 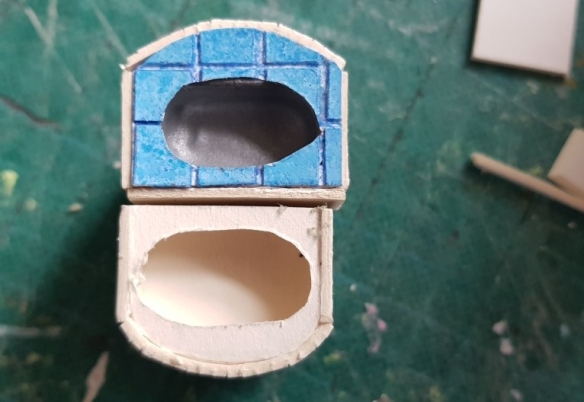 New cabinet at the bottom is a little bit smaller

It turned out that with just a millimeter smaller, it was really hard to fit the sink in, for which I used piece of a blister pack that did not magically shrink a bit just by my willing it to. But I managed somehow, painted it, put on some decorative paper, and added a few details: 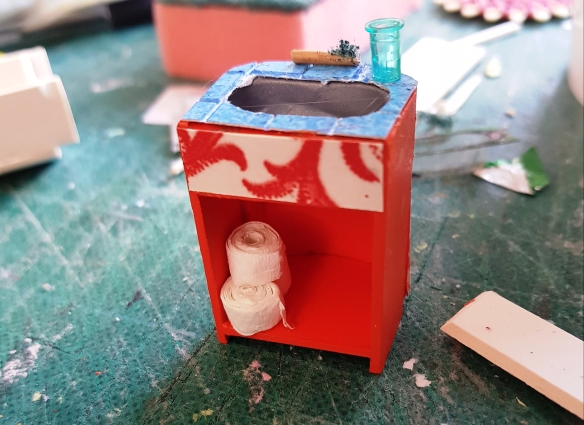 Front view of cabinet with a sink, a toothbrush, a cup and some toilet paper at the bottom

Below is another view of it, from the back: By puttin some paper over the back, I am hiding that I had to score the board to make it fit as a round. The photo also has a matchstick (and the old cabinet) in it for size comparison. Also, the grid on my worktable is a 10mm grid. 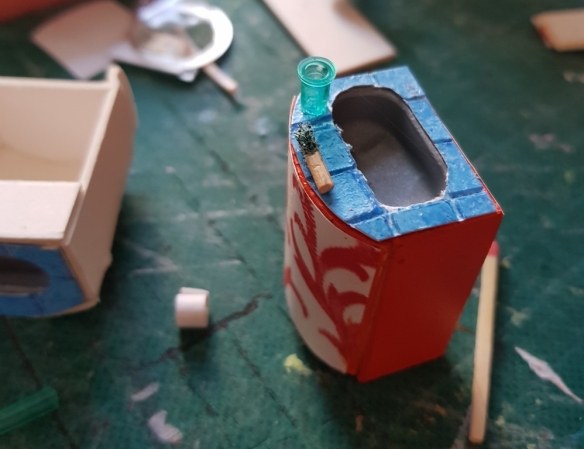 With so much work poured into that bottle, I decided that this had to be my number 100, and it is the bottle for which I wrote the accompaning letter (to be rolled up and placed beside the toilet paper) first. But I actually started the bottle No. 101 with the disinfectant bottle first.

Well, you can see by now that I have a bathroom / hospital / sanitary thing going with these bottles. That’s because I am still in the finishing steps for my artist book “346” involved. But that, too, is another story to be told at a different time and place.

pencil loop closure work like this: There are two loops attached to the front over of the book, and one in the middle between the two on the back cover flap. You close the book, and the loops line up, then you push a pencil through and they all stay in place. Pull the pencil out, and you can open the book – and you have a pencil ready to write, too!

I then tought, it was time to make a miniature book again for a bottle. And I was going to pay more attention to the closure (of the book) this time. So I managed to make a teeny tiny pencil loop closure. I explained what that is above as a caption to the image. Obviously, with a book as tiny as this, I can’t put in an ordinary pencil. Instead this is a tapered and clipped toothpick, with some black painted on. I experimented with making it a real pencil that would write, but didn’t really like the result. You can see the real pencil in the picture below. 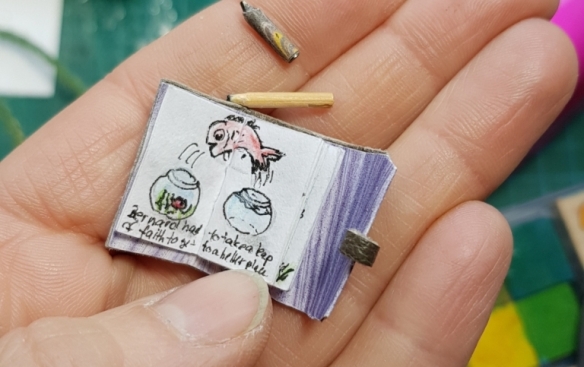 I then put the book on what I thought could look like a hospital blanket and pillow, but probably it doesn’t, and put all this onto a hollow pedestal into which I put the accompaning letter. Unfortunately, as you can see in the group image above and maybe below, that placed the book and miniature scene rather close to the cork. 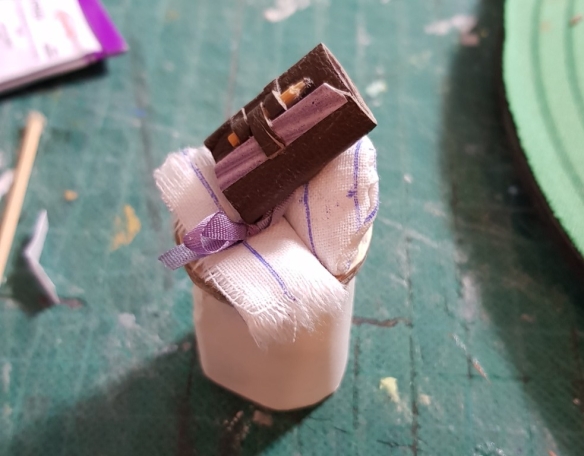 Book on its bed, ready to go in the bottle

At that point I had spent the better of two days on making the bottles. I was waiting for 4 bottles from Peter, one for each day I’d spend in Sheffield. So I made the last one rather quickly, I must admit, and filled it with miniature kidney bowls.

Peter’s bottles reached me just in time the afternoon before I left. Below is the array of bottles I packed, including two empty ones for bystanders to make their own. – I am always hoping someone might join me, but unfortunately this rarely happens. More about that in my next blogpost about my Sheffield dispatches! 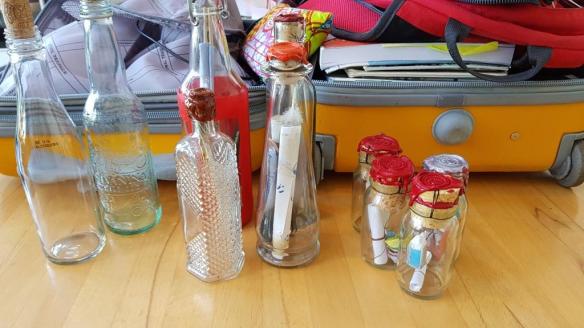