Set up at The Carousel in Nottingham

Last Tuesday, on the evening of the 23rd of July, I hosted my first truly public event ever: Art in Bottles, a workshop and discussion evening about messages in bottles. As a reader of this blog, you’ll know that I prepared a bunch of bottles for it, and Peter S. and Wolf Schindler both sent bottles for me to exhibit, show off and talk about on the evening. So I had 18 bottles to show that evening.

We started off with a round of questions: Is it legal? What about the environmental aspect? How to make a good message in a bottle? What to you write on the letter? Who finds it?

Once that was more or less answered, we all set to work. I brought a variety of materials and tools to make messages in bottles, but several had also brought bottles of their own, and a bunch of materials to make stuff, too. And so everyone got busy.

I brought paper, wood, papermache, pencils and colours, beads, bottles, thread – I forgot scissors (there’s always something you forget, isn’t there?) and more

While everyone set to work, I read out some random facts about messages in bottles I had prepared. 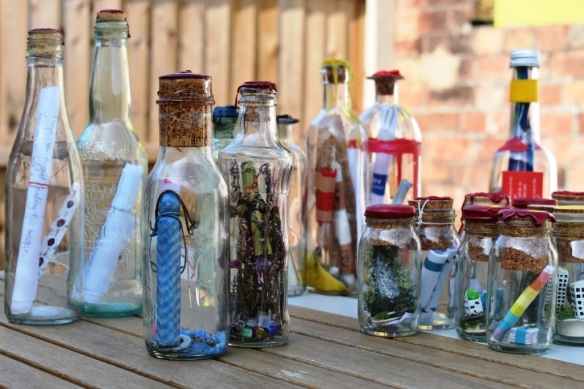 So now there are 22 bottles sitting in my studio, waiting to be dispatched this summer. There’s not the room to show them off in all detail here in this post, and to do them justice. I figure, I’ll show more of them when they actually get wet. (Btw. Peter, did you want me to test the floatability of one of you bottles before the actual dispatch?)

Dispatches are planned throughout August. Stay tuned for more. You can always check this page here for – sometimes last minute – updates on where I am going to drop some bottles in. But if you would like to meet up, it would be best if you got in touch to let me know, then we can discuss whether and when we can meet up!

2 thoughts on “An evening with Messages and Art in Bottles”